Star Rangers is in Alpha! 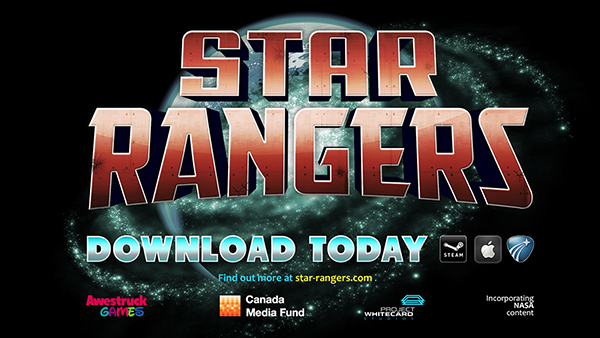 Sunnyvale, CA: Everyone will be able to play the Star Rangers Alpha video game on private access with their PC or Mac computer. Star Rangers is a game that allows game players to experience being an astronaut, realistically, in the near future, about the year 2035.

The game includes information on the solar system, which was provided by NASA, assistance from the University of California Irvine, who in turn brought the Bill and Melinda Gates Foundation and the MacArthur Foundation to back the effort. The Canada Media Fund also backed the effort to produce the game.

Project Whitecard, the company who developed the game, has worked with NASA on other projects developing innovative education platforms.

The Star Rangers Alpha is being developed with the Steam store community’s involvement. With this approach to development, the creation of Star Rangers will now progress in the direction the community chooses and contributes to, such as emphasizing asteroid-mining, or ramping up buildings for Mars colonization.

Star Rangers is an open ‘sandbox’ of the local solar system incorporating NASA content, and with an emphasis on surviving and thriving on worlds other than Earth. The game has been in private alpha on Steam for several weeks already, for vocal members of its fan base. The first alpha will feature some 6 maps on Mars, including the Victoria Crater, the Million Mounds area of the Moon, and a best-guess depiction of what it’s like under the ice on Europa.

Those who have participated in the alpha will be able to continue enjoying the game as it now moves over to Steam Early Access.

Star Rangers will include virtual reality integration for this release. Players who own an Oculus Rift development kit will be able to race their companions around Mars in VR, on one map.

Did you know, there's much more to games than meets the eye? New VR! An exclusive in town - we love to show it off. If interested in knowing more, call us anytime 204-269-0718